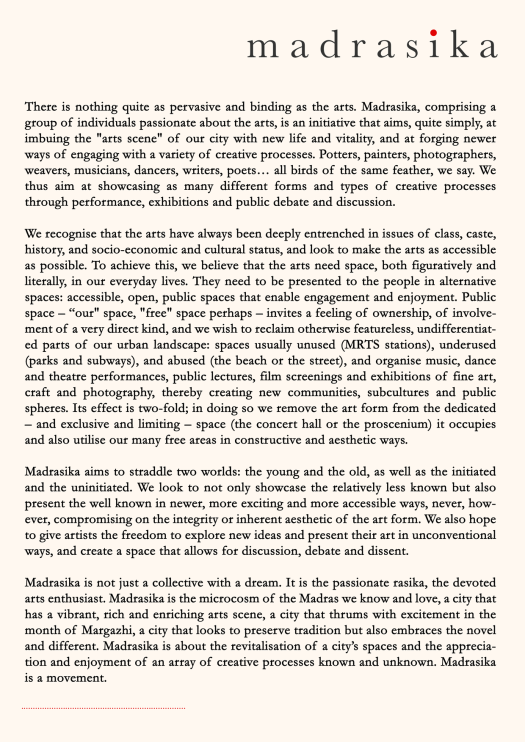 One of the annual stars of Justice Rocks, Sofia Ashraf, tells her brief story of shedding expectations and shackles, and embracing her heart in her brain. Power to her and all of us.

The toughest part about following your heart is the trail of broken ones you leave behind. Standing up to society doesn’t mean picket fences and tear gas. My Tiananmen Square was hearing my grandmother plead, with tears in her eyes, for me to accept Islam again while I refused to give in. My hunger strike was seeing the pride my family had in me slowly drain away. My hemlock was willfully accepting that my mother could never truly accept the person I have become. But I am too brutally honest to lie to myself. I did it for 22 years and I couldn’t do it anymore… …I am not the same girl who left home 4 years ago and yet I am still her. That girl was rebelling against pop culture by wearing her convictions on her sleeve. This girl has a whole new revolution to sustain. That girl couldn’t experiment with her clothes, so she expressed herself through her hair. This girl still loves to take scissors and colours to her hair. I mean, I went bald for heaven’s sake. If haircuts are therapy, that right there is rehab! That girl may not relate to this one nor vice versa. But I think the two can respect each other. They both believed in something.

Read the full story on Homegrown

“Neighbourhoods constantly change, and this change is a result of many forces that interact, and often resist each other to create the city that we see today…We hope that through granular narratives of people’s experience of place-making in Chennai, we gain insight into how we can build a more inclusive, and supportive city.”

The families and students of 1965 remember the Buhari’s at Mount Road, not the expensive chain of restaurants today, dipping chicken in chilli powder and frying it in deep boiling oil to create Chicken 65. What is the use of such a memory other than inducing an association or feeling in an individual(s)? Just a year before this Bob Dylan sang on American television sets  The Times They Are a-Changing…

The million plans of restoration/beautification try to make Chennai a mega/metro/singara/swachch/industrial/growing city that arrogantly ignores the lives here. You and I are meant to move with the times that are a-changing. You or I might not own a strip of land here or have the status of power to make direct changes, but we do have our memories and our lives. We are introducing you to a new group of people who want to gather these memories and aspirations of our lives in this place and channel it for constructing Supportive Cities.

This fellowship opportunity is for any writer/filmmaker/photographer/historian or anyone who does not mind being unpaid in Chennai, while they set out on a six month journey to collect, collate and curate such memories. They promise bi-weekly training and a hand-held process that will end with a public exhibition at Dakshina Chitra. We think any student looking for internships or some experience should jump at this opportunity.

The IT industry has broken many traditional characteristics of relationships between employees & employer. It provides handsome salaries and a sort of flexible work time/location. Women too enjoy more rights than in other industries.Yet, due to less gender sensitivity in this industry women continue to face challenges in their work life balance. Save Tamils Movement, a collective of IT and other professionals from Chennai, is conducting a survey among women workers in the IT industry to understand the ground reality of their day to day life.

Friends from other industries are please requested to share this far and wide. (Participate in the survey here – itsurvey.in)

Urvashi Butalia runs a publishing house called Zubaan: an imprint of Kali for women.  Childless, Naturally is part of a just published collection, Of Mothers and Others: Stories, Essays, Poems, edited by Jaishree Misra. Urvashi writes,

I’ve set up my own publishing house, publishing books by and about women. I am fiercely passionate about this, it’s what gives me joy, it’s what involves me, I know this is what I want to do all my life. I want somehow to make a dent in the way the world sees women, to be part of that change. Is this madness, this obsession? Why didn’t I feel this way about children? Or am I just deflecting an unfulfilled desire? I’m told motherhood is a woman’s destiny, it’s what completes her. So what’s all this about publishing? But I don’t feel incomplete, or that I have missed my destiny. Is there something wrong with me?

In this essay, she explores how we choose to understand a woman and motherhood as one and the same. She asks, who is a mother? Does motherhood come naturally to a woman? Is it selfish if a woman is unwilling to have children? Can anyone be a mother? Can motherhood be learned? Is motherhood about unconditional love? If so, how or why do children pay back? Can mothers be violent? Is the relationship between a mother and a child always a wonderful one?

Childless, Naturally is very beautifully written. Please send it to anyone you know.

Please scroll down all the way. Shocking.

A new study published earlier this year in Marine Policy put the number of sharks slaughtered each year at 100 million, or roughly three sharks caught per second. Outraged by these shocking numbers, Joe Chernov and Robin Richards created an infographic to put the figures in perspective. While shark attacks on humans do happen (there were 12 fatal ones last year) the existential threat humans pose to the future of sharks is far graver. While there’s a lot to be said about the horrors of shark finning, we’ll let this graphic do the talking.

Brief excerpts from the executive summary of the fact-finding report by a team of three from Alternative Law Forum and Delhi Forum, after a visit to the Dhinkia panchayat, consisting of the three villages of Dhinkia, Govindpur and Paatna, in Odisha, between 22nd December 2012 to 24th December 2012.

The Government of Orissa and Pohang Steel Company (POSCO), Republic of Korea signed a Memorandum of Understanding (MOU) on June 22, 2005 for setting up an Integrated Steel Plant in Orissa, in Jagatsinghpur district, affecting 8 villages of three Gram Panchayats of Kujang Tahsil, i.e. Dhinkia, Gadakujanga and Naogaon. The attempts by the district administration to acquire land have been thwarted by strong local opposition starting early 2006, primarily by the POSCO Pratirodh Sangram Samiti, that spearheads the movement against POSCO. In response to this resistance, the State Government has been using the tactic of the abuse of the criminal system to file numerous false criminal complaints against all persons resisting the project, including members of the PPSS leading to threats of arrest perpetually hanging over them.

The fact-finding report observed that the biased and arbitrary functioning of the police targets the villagers resisting the POSCO steel plant, instead of initiating any criminal action against the goons and other persons perpetrating violence against the villagers. The report outlined the following impacts of police actions –

Over the last 8 years, the Government has made innumerable attempts to break the struggle against POSCO by employing various arm-twisting tactics. However, what is perhaps the greatest betrayal of the State against its own people, is the use of the criminal system to implicate villagers in a large number of false cases to intimidate them, instill fear in them and break them into submission.These are the days of emergency. A rapidly engulfing emergency where the State is using every underhand trick in the book to counter the legitimate and peaceful voices of dissent.
These are the days where the State does not even batter an eyelid while using water cannons on protestors against violence against women on the streets of Delhi, all under the glare of the media. Far away, where there are no cameras, no soundbites, the suppression is violent, illegal and with impunity. Our visits have revealed one character of the villagers and that is their indomitable spirit and quest for a peaceful and undisturbed life. This is what the struggle against POSCO is. And this is why we have to all join hands and mobilize all democratic means to end this continuing violence to give real meaning to our constitutional ideals.
In the light of the above, we make the following demands:
1. The Government should withdraw all the criminal cases foisted on villagers of POSCO affected villages and other members of PPSS
2. Cases must be immediately registered in regard to the violence perpetrated against the villagers of POSCO affect areas including but not restricted to the following:
a)  Against police officials in regard to the violence ob 15th May, 2010 at Balithut circle.
b)  Against hired goons in regard to the violence on 14th December, 2011during the peaceful protest against the construction of the coastal road connecting Paradip port to the proposed site of the POSCO steel plant.
3. The Government should immediately conduct an enquiry into the abuse of the criminal system to target villagers and take necessary action against all officials who are involved in the filing of false cases against villagers resisting the POSCO steel plant. The Government should respect and protect the constitutional rights of the villagers to protest and conduct itself in a democratic manner
END_OF_DOCUMENT_TOKEN_TO_BE_REPLACED 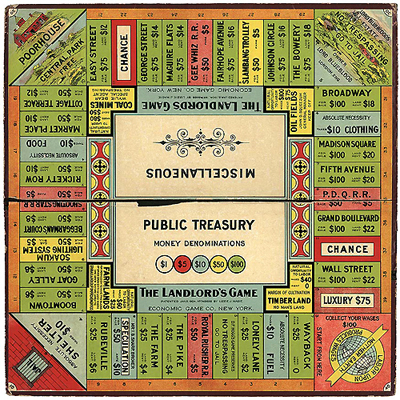 The Landlord’s Game, 1906. Image courtesy of Thomas E. Forsyth. Special thanks to Forsyth (landlordsgame.info) for his assistance with board images.

Christopher Ketcham while reporting on an annual corporate Monopoly tournament, travels into “the antimonopolist history of the world’s most popular board game.” Do read.

…The official history of Monopoly, as told by Hasbro, which owns the brand, states that the board game was invented in 1933 by an unemployed steam-radiator repairman and part-time dog walker from Philadelphia named Charles Darrow.

…The game’s true origins, however, go unmentioned in the official literature. Three decades before Darrow’s patent, in 1903, a Maryland actress named Lizzie Magie created a proto-Monopoly as a tool for teaching the philosophy of Henry George, a nineteenth-century writer who had popularized the notion that no single person could claim to “own” land.

…Before being monopolized by a single person working in tandem with a corporation, Monopoly had in fact been “invented” by many people—not just Magie and the Raifords but also the unknown player who gave the game its moniker and the unsung Ardenite who had perhaps aided Magie in advancing its rules. The game that today stresses the ruthlessness of the individual and defines victory as the impoverishment of others was the product of communal labor.

Centre for Science and Environment recently launched a public information system to track environmental and forest clearance of industrial and development projects in key sectors in India from 2007 till date: Greenclearancewatch.org

Begin by going through “Facts about Environmental and Forest Clearances – 2007 & Beyond” which lays out some important statistics on the number of environmental clearances granted, the kind of developmental projects, the land and water requirement of these and so on.

Following the pressing need for increased transparency in the environmental and forest clearance regime in India, the GCW portal aims to be a one-stop resource base that can help communities access information and statistics, and participate in the decision making process.

A selection of public hearings for developmental projects have been release out in the public domain by GCW. They perceive this will help “develop a clear understanding of the community’s involvement in the decision-making process of a given industrial project.”

Information that can be obtained through GCW include: 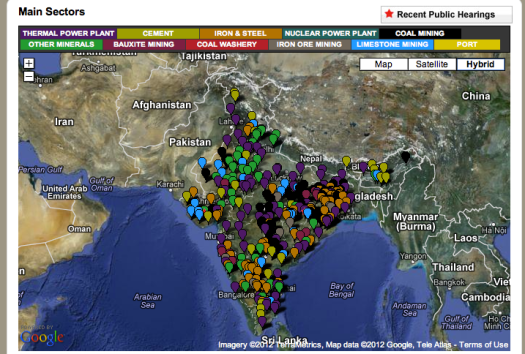 The information that you see on GCW has been obtained from environmental clearances available on the Ministry of Environment and Forests (MoEF) website.